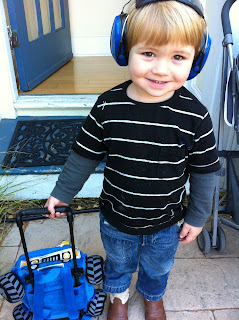 I love this picture for so many reasons. Z has a new haircut that was 7 months in the making. His backpack is full of his new cars that he got as a reward for getting that haircut. He won’t let them out of his sight. He’s rocking his new cowboy boots that he wears everywhere. And those headphones. I love them. Here’s the story about the headphones…

It all started with the tiptoe walking. Well, it probably started sooner than that, when he was a baby and was super antsy and easily unsettled. But, the tiptoe walking is what took us to his pediatrician. He walks on his tiptoes all the time which we thought was no big deal. But, we decided to double check. 2 pediatricians, 1 social worker, and 1 occupational therapist later, we found out that Z probably has Sensory Processing Disorder. The diagnosis just confirms what we have already known. He’s super sensitive to low sounds (hair dryers, hair buzzers, hand dryers, vacuums, blenders). He craves routine. He gets easily overwhelmed if there it too much going on. He can’t handle restaurants or grocery stores. He will only eat cold food. He’s terrified of getting his haircut. He has tantrums that can last a couple hours. He’s a horrible sleeper. He’s super quirky, but we love all of the quirks. (Well, maybe not the tantrums, but it’s just part of who he is.)

Yesterday he got these headphones. He already knows that he can put them on when he feels like there is too much noise around him. He is so much more relaxed already. He also got his hair cut. I don’t think there are enough words to explain what a victory this was for him. The last time we tried to just visit a hair salon, he went screaming out of it and collapsed on the sidewalk sobbing. Full on panic attack. His OT recommended a kids hair salon that we stopped by yesterday. This guy was amazing. Amazing. Z wasn’t super thrilled with it, but he tolerated it and was so proud of himself afterward. We also got him an indoor swing. It’s his new quiet place. He sits in it with his headphones and a book. It totally calms him down.

There aren’t enough words for how much I love Z. He makes us laugh. He has a crazy good memory. He’s always discovering something. He knows who he is. Life with him is never dull. He’s such a great kid. I’m so relieved that we finally have an idea of what is going on in his little body and that there is hope for him. I’m so glad God gave him to us. I can’t imagine our family without him.